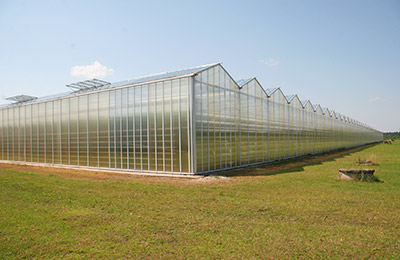 The formerly famous collective farm Marupe, which is situated near Riga, moved its headquarters to what currently is Jaunmarupe, investments were made into the infrastructure, new multi-apartment buildings were built, a boiler house was erected, and a decision was carried to build a greenhouse complex next to it in order to assure an efficient use of the boiler house capacities.

Cucumbers were planted in the first hectare of greenhouses in the beginning of 1979. In May of the same year, the second hectare was used to plant tomatoes.

After the restoration of independence in 1989, the territory of glass greenhouses of the already established LLC Marupe had grown to 7 hectares.

In 1992, the experience of the growers operating in Europe was used to introduce and try out new cucumber and tomato growing technologies. Through changing from planned to market economy and carrying out promotional campaigns, our produce became popular in Latvia and made our civil parish more popular.

In 2004, the company name was changed to LLC Sabiedriba Marupe. Growing tomatoes and cucumbers in glass greenhouses had already become the major and most successful business of the company.

Another greenhouse of 2.3 ha was completed in 2007. Tomatoes were grown in the new greenhouses. The total quantity of cucumbers and tomatoes produced reached 4.5 thousand tons a year.

On 19 November 2008, the company LLC Sabiedriba Marupe was divided into business sectors to establish the subsidiary LLC Marupes Siltumnicas